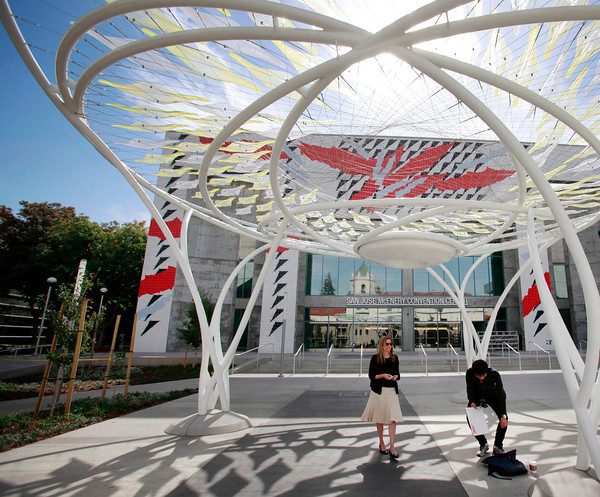 The San Jose Convention Center re-opened its doors on Thursday, October 10th after a $130 million modernization.  The project starter in March 2011 and took two years to complete.  The original building opened in 1989 and was 425,000 square feet large.  The renovation has increased the size of the building by over 100,000 square feet, including expanding the ballroom by a third of its size.  The new ballroom was designed to meet the standards for the U.S. Green Building Council’s Leadership in Energy and Environmental Design Silver Rating.  Green design features include recycled concrete from on site demolition, reclaimed redwood, and energy efficient LED lighting.  The Convention Center generates more than $86 million in annual spending for downtown San Jose, and is expected to provide even more with the new makeover.   Much of the old building’s design elements remain, including the portable tent in the South Hall.  One of the most eye-catching additions is a new interactive artistic centerpiece called the “Idea Tree”.  The piece, created by South Korean artist Soo-In Yang, greets newcomers by remixing visitor comments into new sounds.